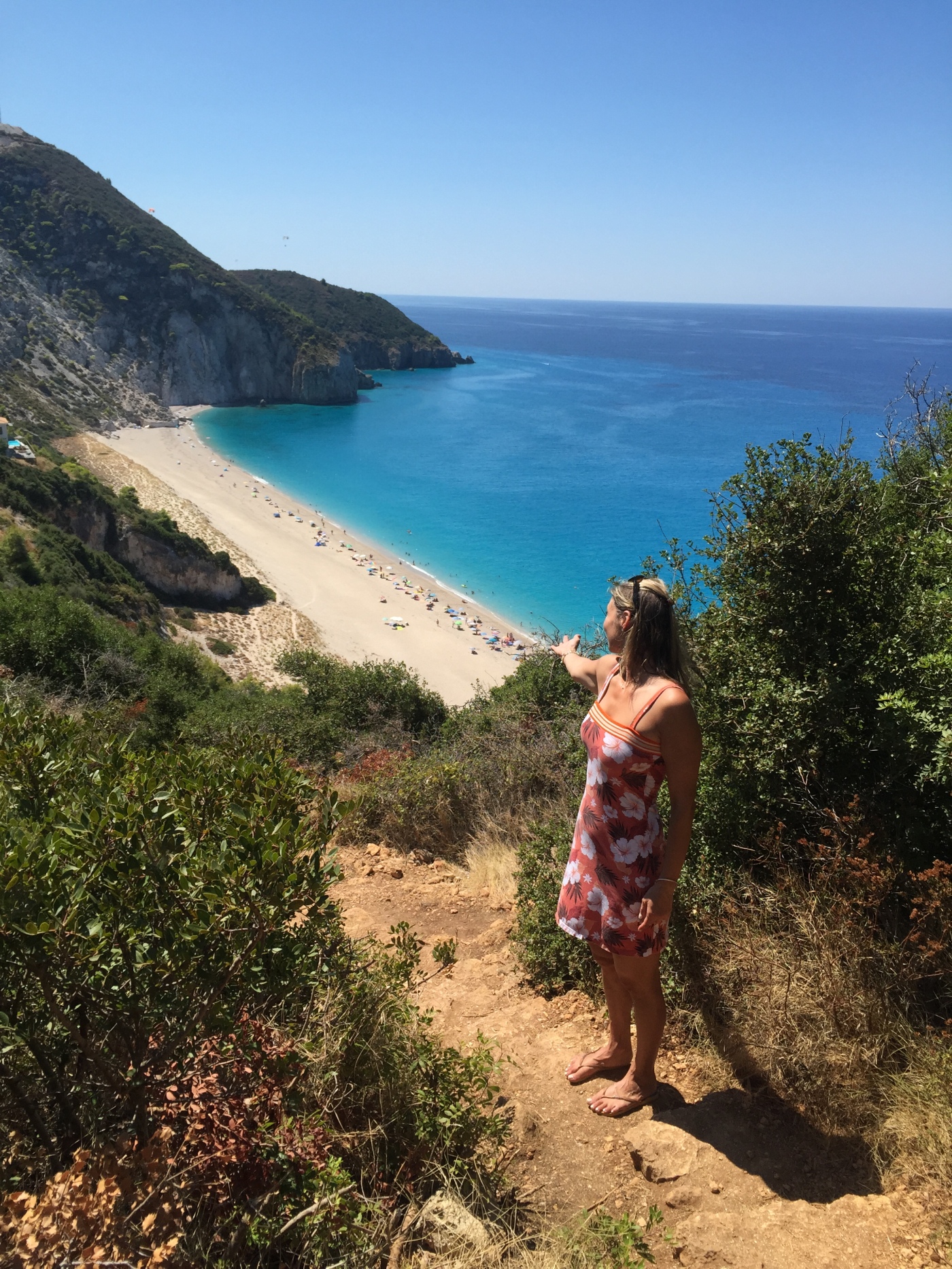 THROUGH HELL AND HIGH WATER

Lefkada is a beautiful island with incredible beaches and the most crystal clear blue water of the Ionian Sea. It’s one of the 6000 Greek islands and is connected to mainland by causeway. There is an airport to fly in, or you can make it much more complicated and take a 7 hour overnight ferry, followed by a 2.5 hour car ride… That was my way of getting there 🙂 .

I was in northern Italy for my friend’s wedding and when I looked at the flights, there was nothing direct to Lefkada. I would’ve had to go to Athens and then fly into the island. As my family was already vacationing in the south of Italy, it was more convenient to go meet them in Brindisi and take a ferry together. And what a ride that was! We chose Grimaldi Lines since it was one of the shorter routes and worked well with the time schedule that we had for this trip. As we arrived to the port, we had to ask several people where the entrance to the ferry was. There were no signs or directions anywhere! The ferry itself was clean, but OH SO HOT! There was no AC and a LOT of people. Now this is overnight ferry, so I was hoping the seats would at least recline a bit and the lights would be dimmed- no such luck. Honestly, it was hell. 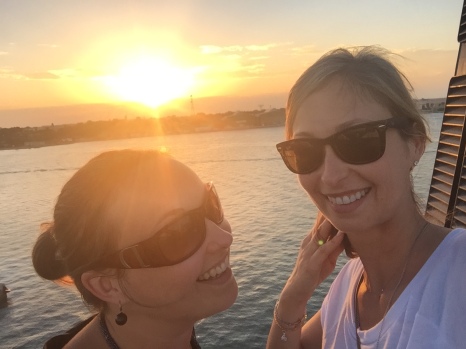 We tried to sleep, but the noise, the heat, the lights and uncomfortable seats made that pretty much impossible.  We got to see a nice sunset leaving Italy, but that was the only positive Grimaldi Lines ferry experience.

We arrived to the port of Igoumenitsa at 5am and luckily the rental car was already waiting for us. The port was not too welcoming- lots of homeless dogs, smell and trash. So far, Greece has not impressed us much 🙂 . Luckily, my Italian brother in law Cosimo is a good driver and is used to the winding narrow roads. Because that’s what we ended up on after ignoring the directions from the rental car girl and trusting the GPS. Instead of it being relatively easy drive, it took us through the mountains! Sleepless ferry, pitch black mountain roads, stray dogs chasing the car- what did we get ourselves into?? 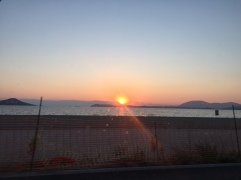 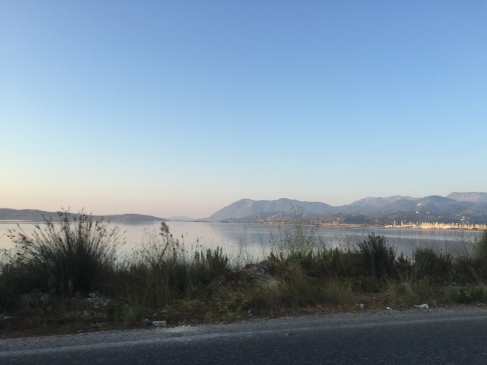 Well, as the sun was rising, we started seeing the beauty of this remote island. It did get better from there on 🙂 . Not right away, but it did.

We reached our hotel (Lefkada Beach Hotel) tired and cranky. Not the time to tell us that they don’t have a reservation for my sister’s and her husband’s room. I booked both rooms on hotels.com and showed them the reservation. The staff was very nice and promised “the roof over the head”. My sister Agne and her husband had to spend a night at the nearby hotel, since ours was completely sold out for the night, but the other hotel turned out to be even nicer and they returned the next day. So it worked out well at the end! 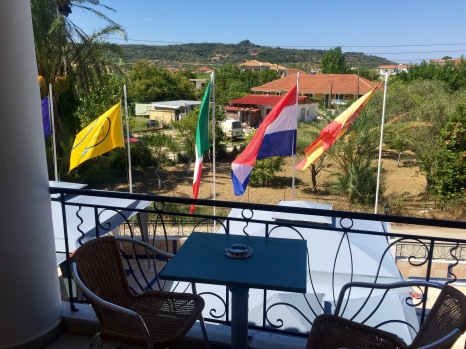 Hotel had pool and daily breakfast. It was simple, but comfortable and apart from the reservation hick up we had no complaints.

Now that we are finally here and recovered from the long and tiring journey, let’s talk more about the beautiful gem that this island really is. The fact that it’s not easy to reach, makes it less crowded and touristy.  That does not stop it from having a LOT of restaurants with the amazing, fresh and extremely well priced food. There are so many and I did not write down the names of all of the ones we tried, but I can honestly say, we did not have ANY bad food on this island.

I will share the two that I remember most. Seven Islands in Ligia, right down the street from our hotel was the first place we went for dinner. 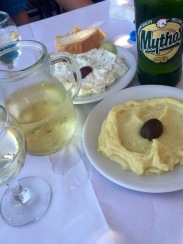 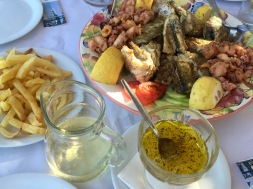 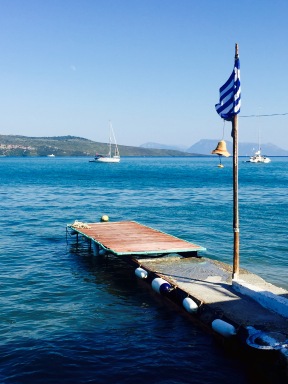 Maybe that’s why it stuck in my memory. Or maybe it’s because it was literally on the edge of the water, and we were eating the sea bass caught fresh right there, from the same bay. Accompanied by the Greek salad (of course!) and a Greek beer Mythos, we finally felt like we are on vacation.

The second restaurant that you absolutely must visit is Rachi in the small village of Exanthia. A few hundred people live there and the restaurant is well known, so I would recommend either getting there well before the sunset (you must see the sunset from there, that’s part of the experience) or make the reservations in advance. The drive up the hill is steep, streets are narrow and not for the faint of heart.

The village lays at the altitude of 580 meters that’s were the best views for the sunset are. 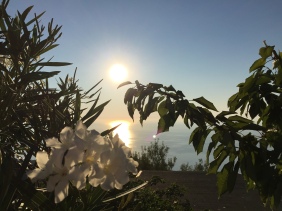 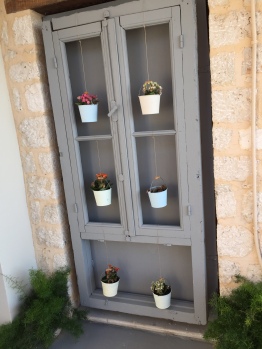 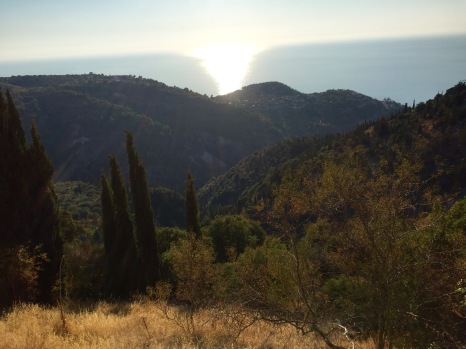 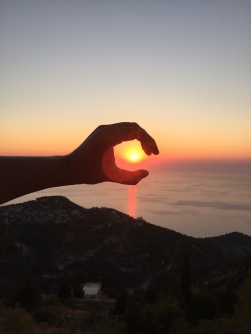 And it’s not just the views that this restaurant offers- the food is amazing as well! 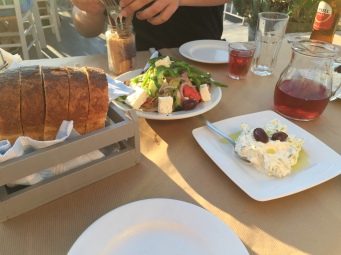 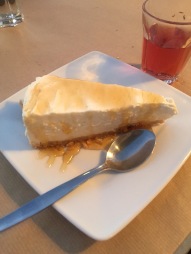 Lamb dishes, salads- everything was melting in the mouth.

And that was everywhere we ate- fresh, light, incredible. 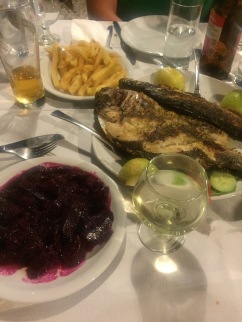 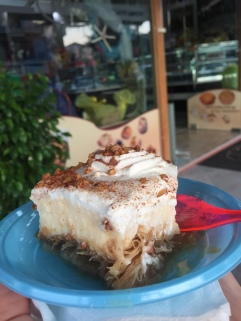 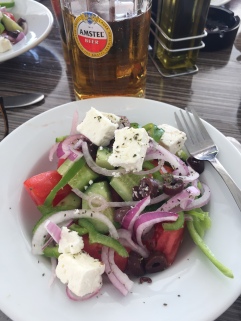 Sadly, I tried making the simple Greek salad at home- even that did not taste the same. Eat as much as you can while you are there!

As much as I love food, we did not come all this way to just eat. There are over 20 beaches on this island and they are all very different from one another. It really depends on how much time you have and how much driving/hiking you are willing to do. Not all beaches are easily accessible, so check before you go and make sure bring lots of water.

One of those pretty hard to reach is the incredible Milos Beach. Located on the west coast of  the island, south of the Agios Nikitas village it is no doubt one of the best beaches in Lefkada. 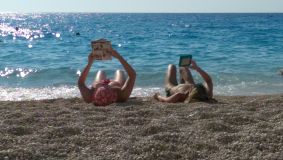 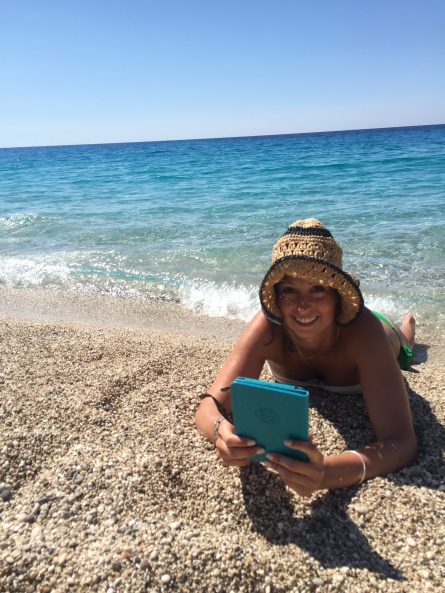 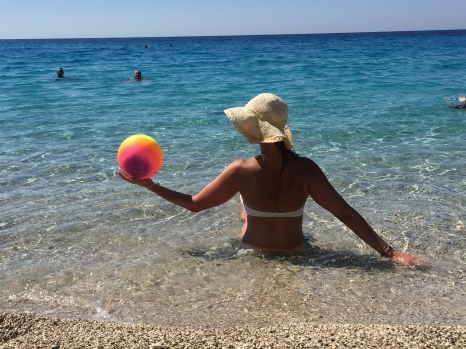 During the summer months, there are water taxis going from the village to this unspoiled beach and after climbing down in the heat, we gladly took a taxi boat back. 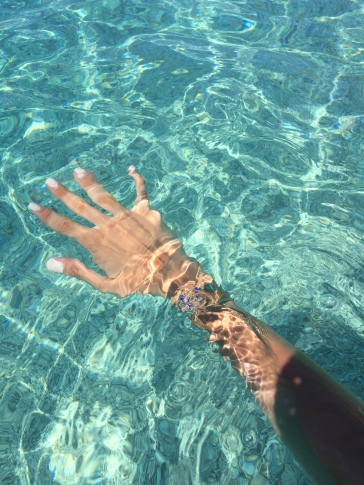 I have seen many beaches in the world and up to this day I think the water was the clearest crystal blue that I have ever encountered.

Egremni or Egremnoi is another remote and hard to access beach on the south western coast of Lefkada. We were able to get there by foot and down the steep stairs, but that was in August 2015. 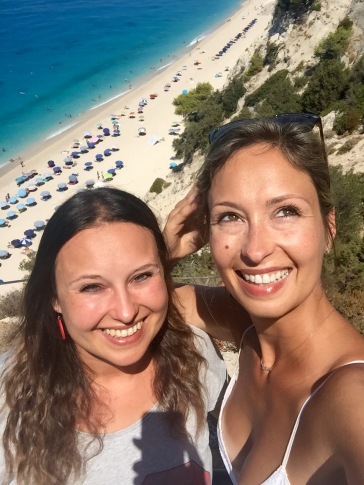 In November of the same year, 6.1 magnitude earthquake hit the island, destroying one of the most beautiful beaches in the world. Luckily the beach is recovering, but the access to it at least for now (2017) is only by boat.

We drove all over the island and ventured into Vasiliki village south west of Lefkada town. Vasiliki Beach is not as picturesque as Milos or Egremni, but you also don’t need to climb stairs or take a boat to get to it.

It is perfect for windsurfing and you can either bring your own or rent the equipment right there.

To see the island from a different perspective and to have a break from driving every day, we booked a whole day excursion on Macedonia Palace.  Not that it went down without an adventure either 🙂 . The cruise was supposed to start at around 9.45am, we arrived to Nidri town at around 9am. Came to the boat and were told that there is no more space left! Nobody cared that we had reservations. Apparently, they oversold the cruise in hopes that not everyone will show up! Well, we did, and we were not happy about the ruined plans for the day. Good thing it was not our last day on the island, so we got a 20% discount and decided to come back tomorrow. Have no doubts- we got out of beds much earlier the next morning and made the boat this time.

I enjoyed this day trip very much. 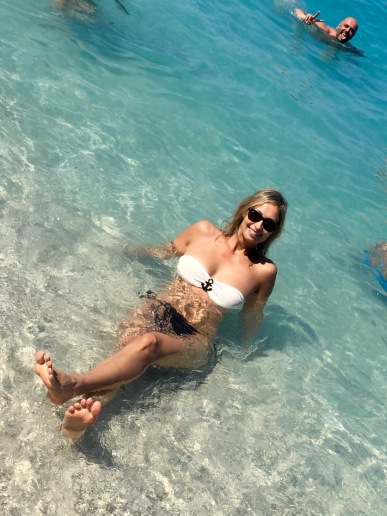 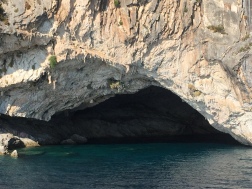 Despite the initial disappointment about how disorganized the booking system was, the actual sailing was very nice and we saw a lot of beautiful sights. 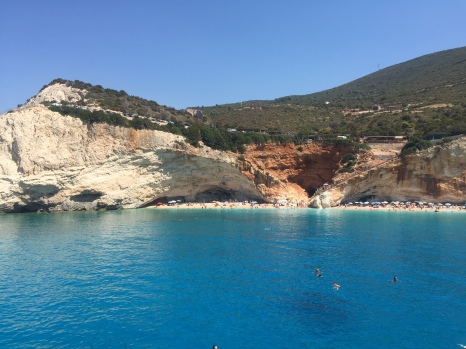 We got to swim at the incredible Porto Katsiki beach, go by the Cave of Papanikolis, stopped by a village of Fiscardo for lunch (wish we had more time there, it was a charming village), got coffee at the island of Ithaka, toured around the three islands of Scorpios, Sparti and Kastri and swam to the beach of Scorpio. The trip ended at 6.30 pm and we were happily tired and full of amazing memories.

On the way back to Igoumenitsa and our dreaded ferry back to Italy, we drove by a cute town of  Parga and then stopped at the mystical Piges Acheronta – or Acheronta Springs. 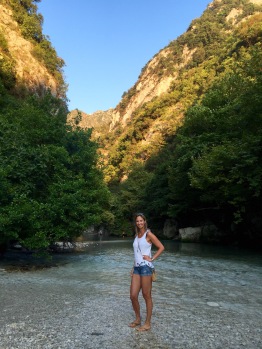 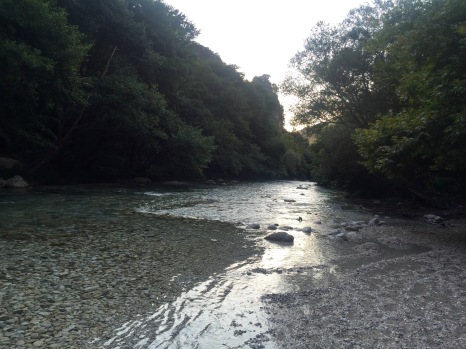 In ancient Greek mythology, Acheron was known as the “river of woe”, and was one of the five rivers of the Greek underworld. ‘The place for healing’ is beautiful, calm and worth making a trip to.

There is immense amount of beauty, amazing nature and so much to discover in this remote island.

It was certainly not an easy to reach destination, but don’t we usually have to put in the effort to experience something really good in life? We were tired, we had some arguments as it naturally happens during the family trips, but at the end of the day we all loved it. It was another great trip to remember.

‘O-MAZING OMAN!’ is live on www.stampinpassport.com
🎉Congratulations! We’ve made it to 2022!
🏝R&R in Salalah- the third largest city in Oman, but we came here purely for its seaside.
Muscat- the capital of Oman 🇴🇲.
🎄Merry Christmas from our family to yours! 😘
Wahiba Sands is a stretch of multicolored sand dunes(reaching up to 100 meters/330ft high) located in the Eastern part of Oman.