Mini trip to Sri Lanka was sort of vacation after vacation- a place to relax and unwind after our whirlwind trip through India (see India posts for the details!). This busy and loud country left us in awe, but also very tired and in need for some peace and quiet.

Both- American and Lithuanian citizens need e-Visa to Sri Lanka. It was incredibly easy to obtain online- we received and email confirmation on the same day of the request. Link to the website is here.

We took an afternoon flight from Delhi and a 3.5 hour flight got us to Sri Lanka’s capital by 4 pm. Colombo airport is not near the city, it’s around 45 min drive to downtown. We did not have transportation arranged by the hotel, since they asked for 175 USD for a one way trip, and we saw that Uber and taxis are by far cheaper. We ended up booking a car with a local transportation company right at the airport. The driver agreed to make a couple of stops in Colombo before bringing us to Weligama Bay. It ended up costing us 80 USD- half of what our hotel quoted.

Colombo has a long history as a port and has been ruled by Portuguese, Dutch and British.  Capital’s architecture now mixes high-rising skyscrapers with colonial buildings. We knew we won’t have any time to come back to this city, so decided to make a few stops on the way down to the resort at the beach. 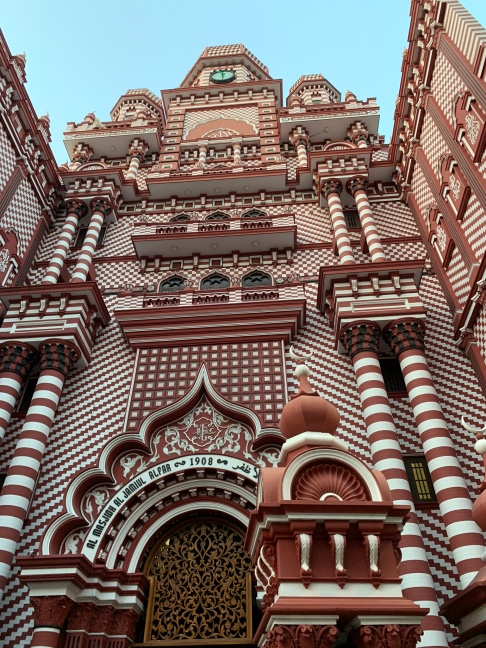 I fell in love with the color and the design of this building from seeing the pictures online prior to the trip, so I really wanted to experience it in person. We made this our first stop and checked out one of the oldest mosques in the city. Built in 1910 it’s hybrid style architecture mixes elements from Indian, Indo-Islamic, Gothic revival and neoclassical styles. Before other landmarks were built, some are claiming that this mosque was recognized as the landmark of Colombo by sailors approaching the port.

Just passing through the city,  we were taking in the warm and clean air, checking out the surroundings and marveling at the completely different driving style in comparison to India. We got so used to hearing the beeping that it was strange to be in the car and not hear the constant noise!

We arrived at one of the most important temples in Colombo and the first thing we noticed was a row of elephants chained up along the fence across from the temple. The chains were heavy, poor animals were swaying from side to side and it was heartbreaking to watch. Buddhists believe that elephants were servants of the Buddha or even a previous incarnation of Buddha himself. Elephants are used for the processions/parades and carry sacred relics. It was very sad to see the animals being treated so badly in the name of religion.

We were not able to get inside this temple, because of the ongoing ceremony. Some famous politician was visiting as well, which involved a lot of people and security all around the temple. Reading more about Gangaramaya, we found out that in the back there is a young elephant  Ganga chained up in a small space and living a miserable life. Had we known this prior, we wouldn’t have bothered making a stop at this temple.

It was getting dark and we still had a long way to go to our hotel, so the last place we visited was this beautiful temple on the Beira Lake. It’s mainly used for meditation and rest, but we saw quite a few people praying as well. 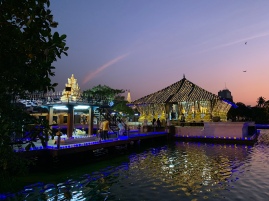 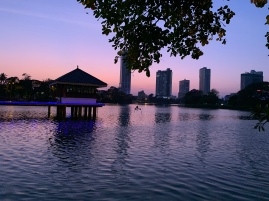 We got a beautiful sunset view of the skyline of the city, walked around and went back to the car- we have seen enough cities on this India/Sri Lanka trip, time to go to the beach! 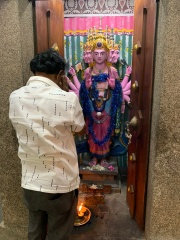 We chose Weligama Bay Marriott Resort & Spa because it was one of the best rated hotels in the southern part of the island (where we wanted to stay) and because we had Marriott points to use, which made the decision a lot easier. 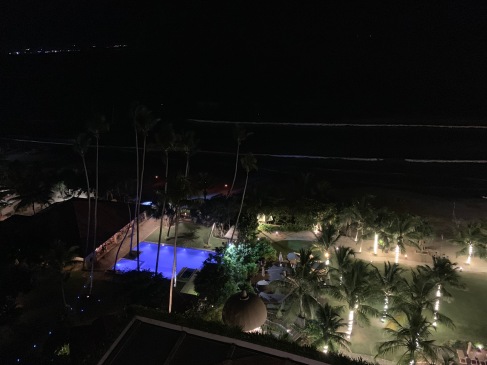 Hotel is definitely beautiful and big, our room was spacious and the view from the balcony magnificent. Spa and restaurants on site, plus the extremely good service confirmed that we made the right choice. We have the next two days for pure relaxation with no plans other than eat, surf, get some sun and enjoy the spa.

Travel tip: If you are interested in the spa procedures (massages, facials, body scrubs etc.), Sri Lanka is a great place for a very reasonable price to enjoy those. Book as early as you can, because they fill up quick. We came from Boston, where one hour massages start at 100+ USD and that is if you are lucky. Here we booked couples 90 minute massages for 35 USD each!

Once we saw the prices, we wanted a spa treatment every day, but because we did not book anything in advance, we didn’t have many options. Well, we took what we could get- express facial at 10.15pm? Of course, why not? We also got a good recommendation to check with the nearby hotel- their spa had openings, so we were able to secure a facial one day, full body massages and a scrub another day, and one more massage on the last evening in Sri Lanka. This was a total pampering that we could never afford back in Boston.

Every day after enjoying an amazing buffet breakfast we would lounge by the pool, then surf for an hour or so – rentals were 400 Sri Lankan rupees per person. It came to about 5 USD for both of us. How can you pass such a great opportunity to practice a fun skill? 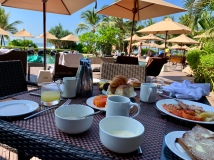 Water was warm, no rocks, no sharp shells and the waves were perfect for beginners like us. It’s a surfer’s paradise!

For dinners we stayed at the incredible restaurant right at the hotel. Highly recommend making reservations, as it also fills up. We enjoyed exquisit fish dishes, we did not have any fish in India, so it was a pleasant change for the palate. 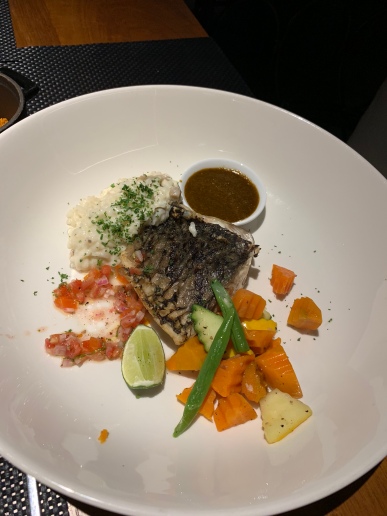 Sri Lankan food is not spicy, but very flavorful. We tried king crab, rice with coconut milk,  fish that I don’t remember the name of- everything was very fresh and tasty.

These two relaxing days went by like a dream, we finally felt like we were on vacation! Well, knowing us,  we cannot stay in one place for long. We have one more adventure planned for this trip- elephant safari in Udawalawe National Park!

Sri Lanka has several places to see elephants. While doing my research, I came across some of the parks that chain up these animals, even in the water, so tourists can see a “bathing elephant” etc. We were 100% sure- we’d rather go on a safari and not come across an elephant, than pay the park that abuses them for a good photo opportunity.

Udawalawe came up as a home for 400 or so elephants that are living free in this protected reserve.

Travel tip: Highly recommend hiring private guide Lahiru Prasad (lahiru.jpdk@gmail.com). I read many reviews about him on TripAdvisor and decided to give it a shot. We checked with hotel first what their organized tour would cost. It was DOUBLE the price of what he charged us (260 USD for both of us including pick up/drop off at the hotel). 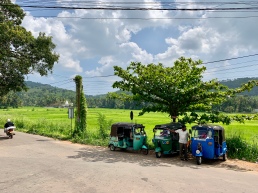 The drive from Weligama to the park took over 2hrs. Sri Lanka is a small country but it takes a long time to get places on the winding roads. We did afternoon safari and by the time we reached the jeep it was 3pm. I think the intention was to start by 2pm, but the driver was quite slow and we did not make it earlier.

There was another couple in the jeep, the driver in the front, and Lahiru, our guide, with us. It was great that we had a driver AND a guide. Any time Lahiru spotted something, he would knock on the side of the jeep and the driver would stop, so we could observe/take photos. 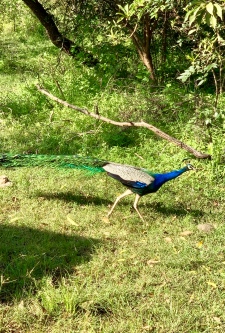 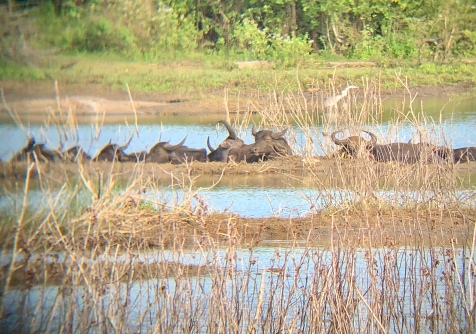 There were countless birds (several eagles), we saw cobra, a herd of water buffalos, turtles, crocodiles- you name it. Lahiru would spot them like he had an eaglevision himself! Amazing trick- he took some of these photos with my iPhone through his binoculars. It came out a lot better than trying to zoom in.

The best part of course were the elephants that we got to see close up. 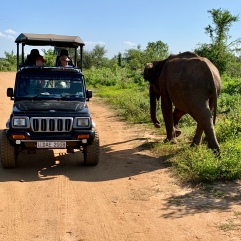 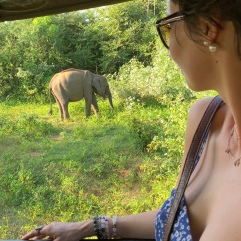 We were so happy witnessing free and healthy animals. No chains, no poking- they were completely indifferent to the cars and the people, clearly not afraid of anyone hurting them here.

Another great thing about this safari- Lahiru and the driver took us to the different locations than all other jeeps were going. Only a couple of times we passed another car, otherwise it seemed like we were the only ones in the whole park!

We finished by 6pm and the drive back was just as beautiful with a couple more elephant sightings along the way. 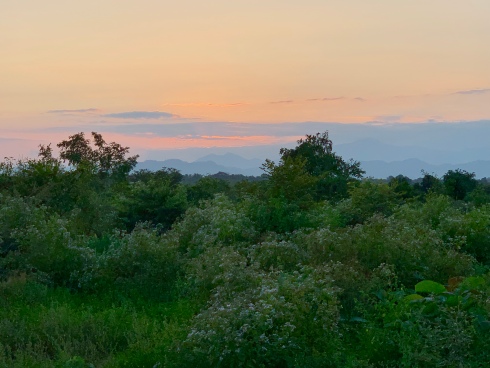 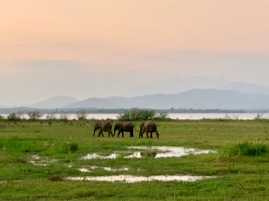 One more night in amazing Sri Lanka, one more swim in the warm Indian Ocean and we are off to Mumbai, where this trip has started…

It was a very short, but very relaxing visit to this beautiful island. We explored just a little, but certainly liked what we saw (minus the chained up elephants near the temple). We’d certainly like to come back and see more of it some day, but for now, we’ll bring home a little tan and lots of memories.

One thought on “Riding waves, not elephants!”